The winter 2016-2017 inter-club print competition, hosted by the Brattleboro Camera Club, was held on Thursday, January 26, 2017 at the Vermont Center for Photography in Brattleboro, VT. Roger Turner served as the competition organizer and coordinator. Score keepers were Susan Hall and Art Vaughan. The judges for this competition were: Charles Burke, Paul Deegan, and Michael Roman.

For the Winter 2016-2017 competition a total of 151 prints were submitted... 43 class “A” B&W, 28 class “B” B&W, and 80 Color. Participating were 20 clubs... 11 in class “A”, 7 in class “B”, and all 20 in Color. A total of 21 prints received awards... 6 class “A”, 7 class “B” and 8 in Color. Clubs that submitted less than their full allotment of four color and four B&W prints, or that missed the winter competition entirely, are encouraged to submit make-up prints along with their regular submissions for the spring competition, to be hosted by the Milford Camera Club on Wednesday, March 8, 2017. 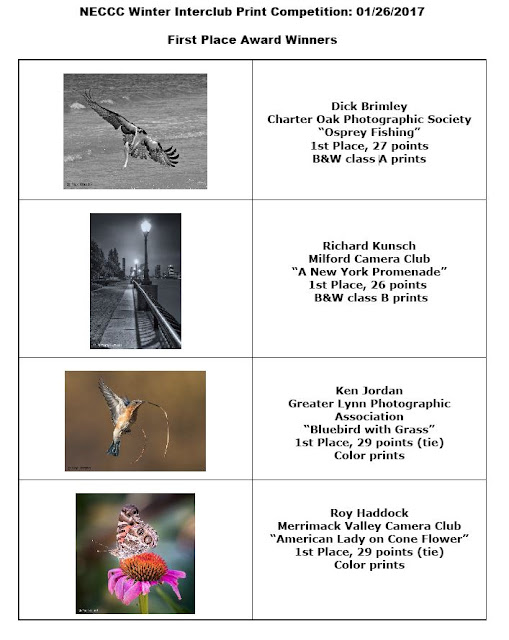